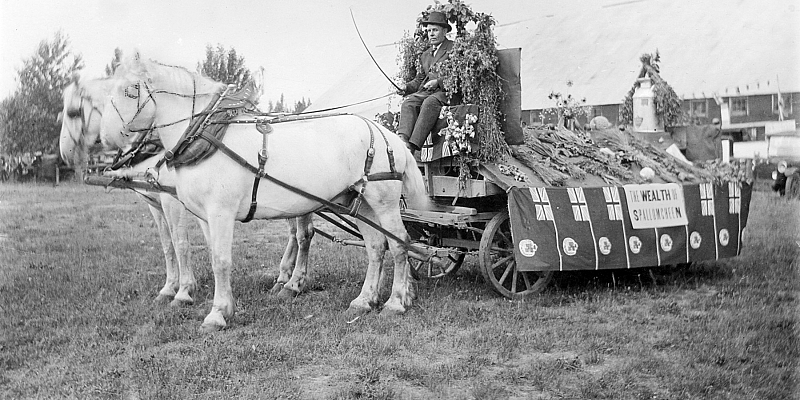 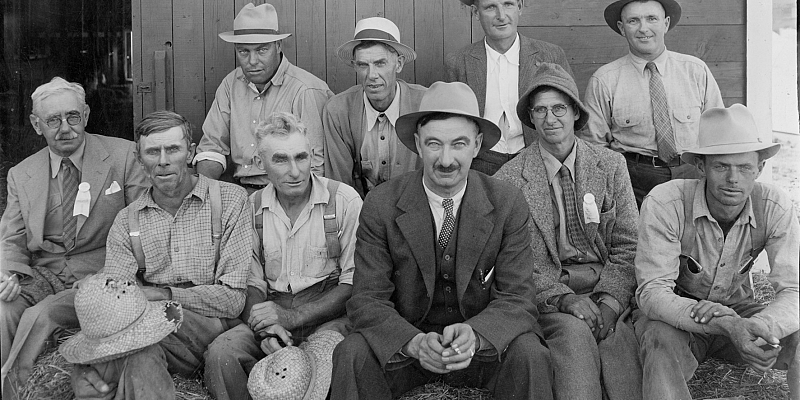 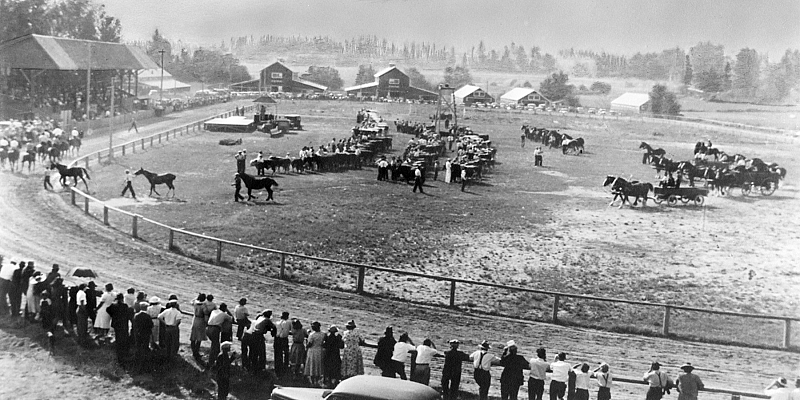 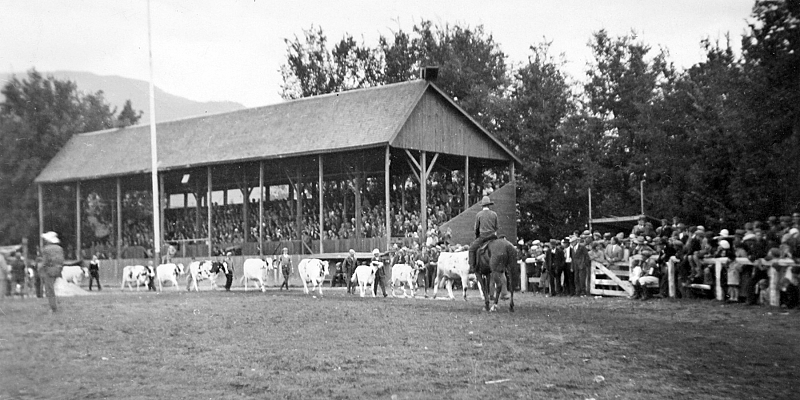 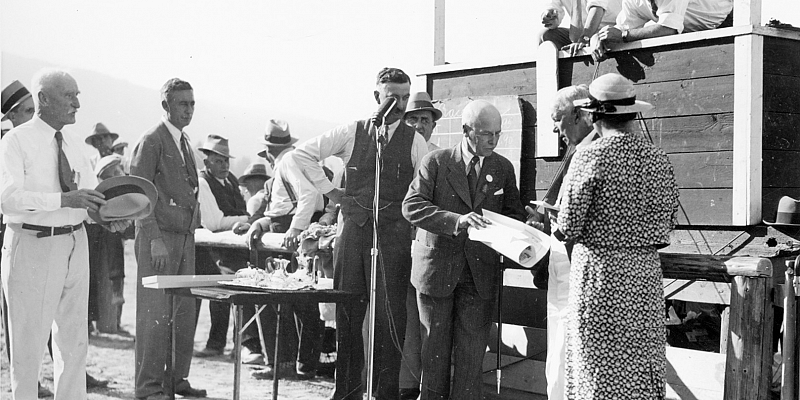 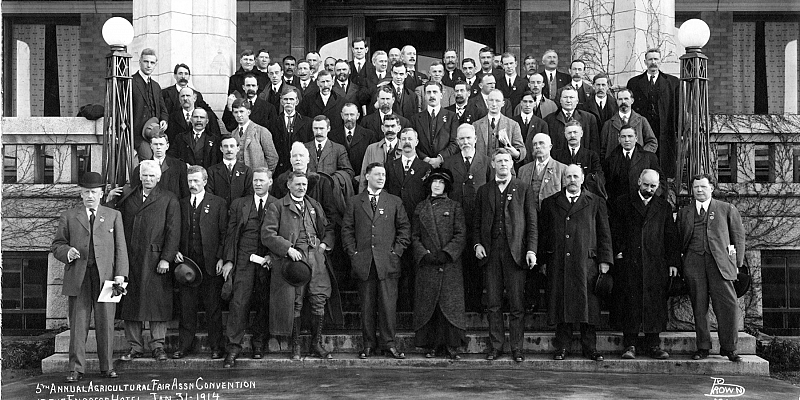 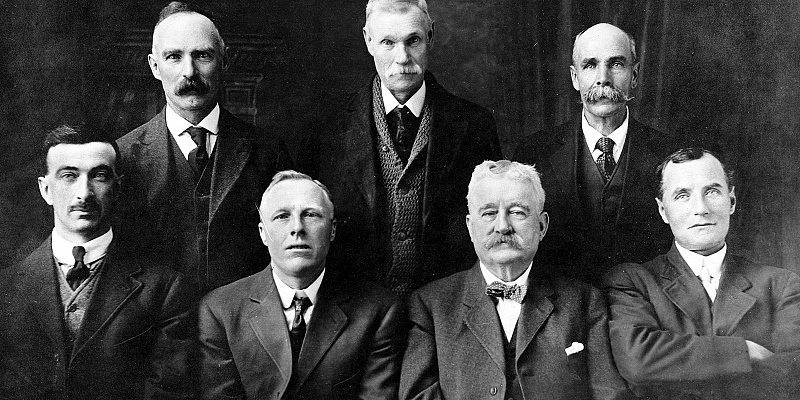 Before the turn of the century, the Armstrong Spallumcheen area was being settled by immigrants.  These immigrants brought with them their customs, their beliefs, and their various species of grain, vegetables, and fruit.

In order to discover which breed best suited the new area, the settlers created a tabletop show.  At this show different species were displayed for comparison.  Each farmer compared his own produce to that of others, and if others were superior he would shift his crop the following year.  For example, because there was no refrigeration, winter food supplies had to be gathered and put in the cellar by October.  Consequently, a strain of apples became popular that were hard when picked but that softened a few months later.  The success of these early fairs made life a little easier for the settlers.  Through the fair they were able to improve the quality of all that they grew or raised on their farm.  By such improvements some of the uncertainty that plagued a settler's life was eliminated.

These shifts began to change the face of agriculture in this area.  The small tabletop show in the west end of what is now the Legion building, were so beneficial to the residents that they decided to expand.  By having land donated under the name of the Armstrong Spallumcheen Agricultural Society, they were able to move the fair and livestock to it.  The grounds that the fair moved to were a portion of the present grounds.  Because there were no livestock facilities the livestock were simply tied to the fence.  The lack of barns meant the fair remained a one day event.  Cattlemen would walk their cattle to Armstrong in the morning and walk them back home in the early evening.  The first barns to house livestock were built in 1910 and an additional building was constructed in 1916.  The barns burned down in 1925, so between 1927 - 1929 sheep, swine, poultry, and cattle barns were built.  These barns were located just west of the new grandstands by the Centennial Hall.

The showing of cattle was approached in the same manner as the crops.  Herds were compared and the cattlemen would consider buying a superior calf to improve his breeding stock.  In this way herds as well as crops were improved by the fair.  Later, show herds were brought in from all parts of the province, for better comparison.  The quality of herds in this area grew finer until they could equal any lower mainland herd.

The continual search for a better product brought many changes to the Armstrong/Spallumcheen Agricultural Society.  In 1919 the society changed the name of the fair to the North Okanagan Fall Fair.  The purpose of the name change was to include a larger area to draw entries from.  When the fair was opened to a wider range, the opportunity for comparison was improved.  Under the North Okanagan Fall Fair the fair grew enough to merit the sheep, swine, poultry, and cattle barns mentioned before.

The society decided another name change was required to make the membership even larger.  In 1930, the new name chosen for the fair was the Interior Provincial Exhibition.  Since this last name change the IPE has done nothing but grow.  With the guidance of longtime managers like M. Hassen Sr. and Mat Hassen Jr. the fair continued to develop its agricultural theme.  The fair seemed to be jeopardy during the 1930's, but every year the directors would decide to hold it.  In their determination and spirit of the fair was born and carried on throughout the decades, right up to today.

In recent years, there has been a belief that Armstrong stole the fair from Vernon, but this is simply not true.  The first Armstrong fair was held in 1900, at which time the Vernon fair was still operating.  In 1914 the Vernon facilities burnt down, and with this set back the fair closed its doors.  Vernon ran their fair for fourteen years after Armstrong sponsored their first, and Vernon did not close for financial reasons.  So, clearly, Armstrong did not steal the fair from Vernon.

Since the first table top fair took place the Armstrong fair has been a service to the residents.  Even the present day IPE, though much larger, is an agricultural service to the area.  Recently Armstrong's commercial involvement has increased, allowing it to be one of the few fairs that are not losing money continually.  The IPE has been able to take this new commercial interest and balance it with the agricultural base of the fair.