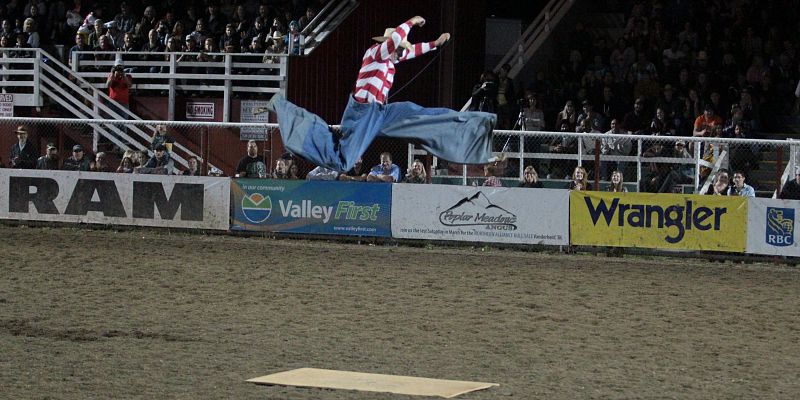 Tickets are only sold from 8:30 am to 1 pm at the IPE office. Tickets will be available at the Rodeo ticket office on the grounds from 2 to 8:30 pm Please call 250-546-9406 to reserve your seats at the Best Rodeo West of the Rockies !! Reserved seating can be ordered online 24 hours a day. 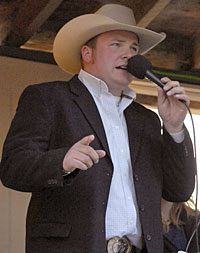 Like many announcers before him, Gardiner’s Rodeo career began in the arena as a contestant. While competing in both the Roughstock and Timed Events, he gained an insight and love for the sport of Rodeo. It is that love for the sport and appreciation for the contestants that he tries to convey to the audience each and every performance. Gardiner’s distinctive sound, infectious energy and informative style has seen him climb the ranks of the industry and become one of the most sought after Announcers on Canadian soil.An occupation that will see him travel from coast to coast 40 weeks of the year as he has quickly and firmly endeared himself to audiences across Canada. Brett has been fortunate enough to have received the Bill Kehler Memorial award on two separate occasions during his intercollegiate career and in 2011 and 2012 received the industry’s top honour by being named the CPRA’s Announcer of the Year.When not travelling the Rodeo trail Brett makes his home in Sylvan Lake, AB with his wife Jaclyn and their two children Grady and Hadley. 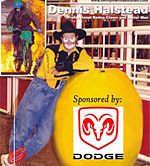 Dennis Halstead has been a Professional Rodeo Clown and Barrelman for 11 years and still enjoys being in the arena as much today as he did 10 years ago. Dennis carries that enthusiasm into the arena with each performance. As well as a Rodeo Clown, he has been a City of Calgary Firefighter for 25 years. Being a Firefighter has helped him appreciate what he does in rodeo, especially his kindness towards children.

When Jaden Holle was a young girl, she saw some beautiful, sparkly ladies on horseback ride past her as she sat on the curb watching the High River Little Britches parade. At that moment, something happened.

​She didn’t know what those fringed girls did, or who they were, but she knew how she felt when one of them waved RIGHT AT HER; she knew she wanted to be one.

On September 25, 2017, Jaden’s dream began when she was crowned the 2018 Calgary Stampede Princess. It was an honour for Jaden to be a part of the Greatest Outdoor Show on Earth, find her own royal wave for the first time, and ride in the same parade that inspired this dream all those years ago.

​Jaden then went on to be the very first Claresholm Chad Besplug Invitational Queen in 2018, representing a top CPRA special event. The dream only continued when she was crowned the 2019 Miss Rodeo Canada in Red Deer, Alberta at the Canadian Finals Rodeo – Canada’s pinnacle rodeo event.

The High River cowgirl has a thirst for world knowledge as evidenced by the three languages she speaks – Spanish, French and English – and, as a Métis is also getting back to her roots by learning Cree, the language of her grandparents. Jaden has also studied Mandarin and Portuguese and encourages you to teach her a word or phrase in your native language!

She is also halfway through the Saskatchewan Urban Native Teacher Education Program, a Métis teaching program that has helped her rediscover her roots.

​That thirst for world knowledge is also apparent with some of Jaden’s most cherished experiences: her time as an au pair in France and as a Rotary Exchange Student in Mexico.

As Miss Rodeo Canada, Jaden’s prayer is that she can inspire people to have the courage to follow their calling and to become the best versions of themselves. For Jaden, this title not only represents being an ambassador for the sport and a role model for the littlest rodeo fans, but carrying on the Western spirit that makes this way of life special. Jaden wants to show others how they can be a cowboy or a cowgirl, even if they have never ridden a horse. For being a cowboy or cowgirl simply means hard work, helping others, and always getting back in the saddle whenever life throws you.